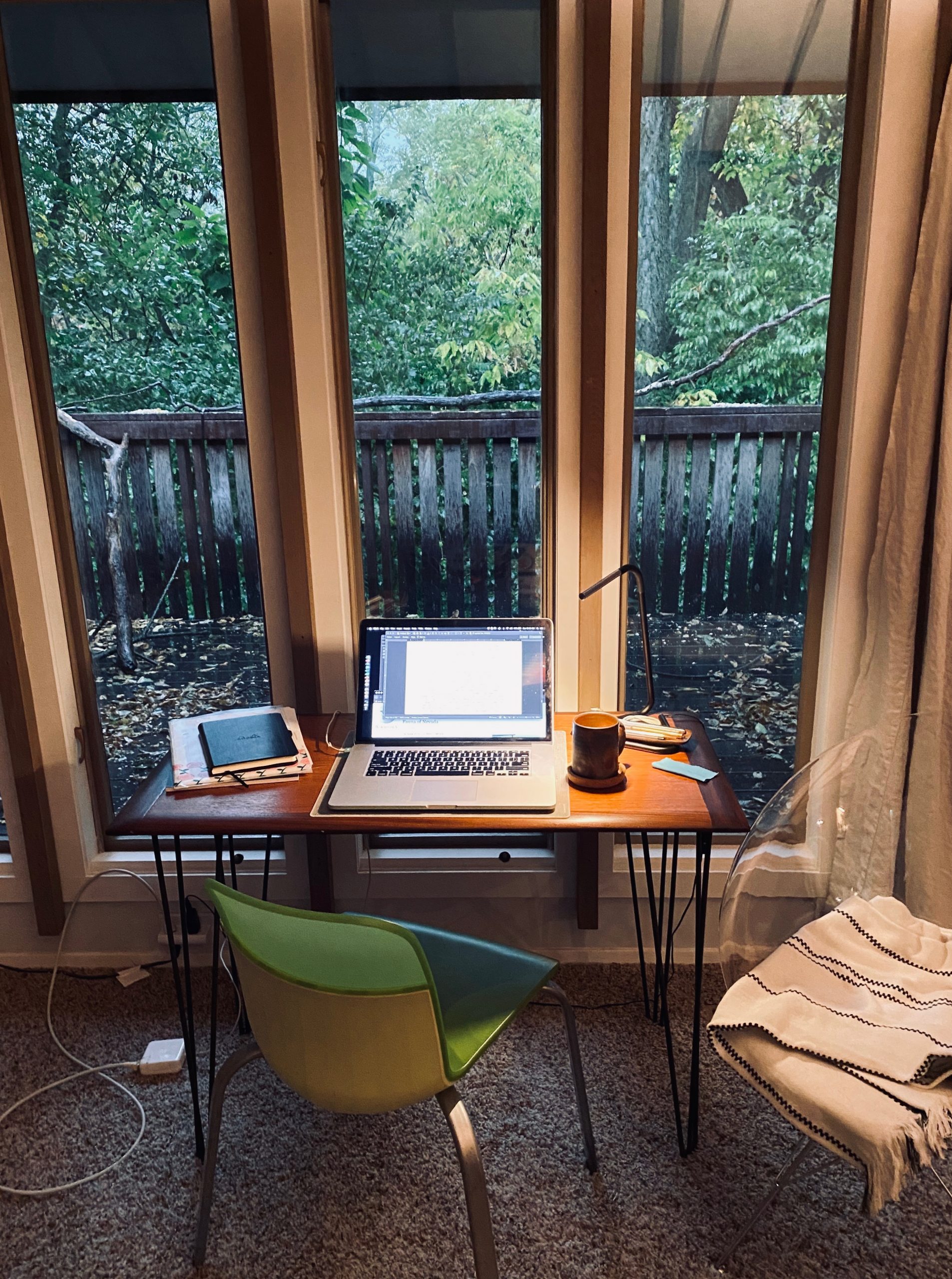 A sweeping rain came through this morning, pulling leaves down from all the trees, and soaking the deck my living room looks out onto. I went to close the front door because a sudden icy wind swept in, and coming, I looked at my desk and thought it was pretty as a picture. And now it is a picture. It is officially fall.

Last night, I had Skype cocktails with a couple of friends, but because the connection wasn’t great, I ended up downstairs, where I also have a desk in front of giant windows, though much less charming. The desk is an eight-foot-long utility table of the sort I always associate with church potluck suppers; the windows look out onto the concrete patio beneath the deck in this picture, so: darker during the day and generally danker. I seldom am down there at night, and never for an extended period of time. But what I saw was wonderful: three or more raccoons, an adult and various half-grown children (perhaps my dinner date of last week is actually several dinner dates); and at least three opossums, one clearly the mother and the others teenagers, if I hazard a guess based on their tufty fur and general air of awkwardness. The raccoons and possums seemed to know each other and be not at all distressed by each other’s company, nose to nose or tail to tail in some cases. Since raccoons and possums like the same sorts of dens, I’m now imagining a blended family.

The week was good for writing, though I only wrote about every other day. But I managed to finish (well, “finish”) everything up through Chapter Eight, plus Chapter Ten, plus half of the last chapter, and half of Chapter Nine. I won’t hit the word count I had hoped for by the end of this month, but I may be able to finish up Nine, and then I would only have two (or perhaps three) more chapters.

I haven’t seen my mother since January, so I am thinking now that I will go up in December: isolate before so I don’t have to when I get there, and then stay for a couple of weeks. I haven’t spent that much time in a row there since my dad died. I miss Wisconsin winters, and since I won’t be anywhere else I need heavy boots and winter coats, I am crossing my fingers for early snow.

Last night, my friends on that skype call and I got to talking about the things we miss (or to our surprise don’t miss) since this all started, and the things that have turned out to be positives.

What I miss is less than I expected, but including:

What I am surprised not to miss: