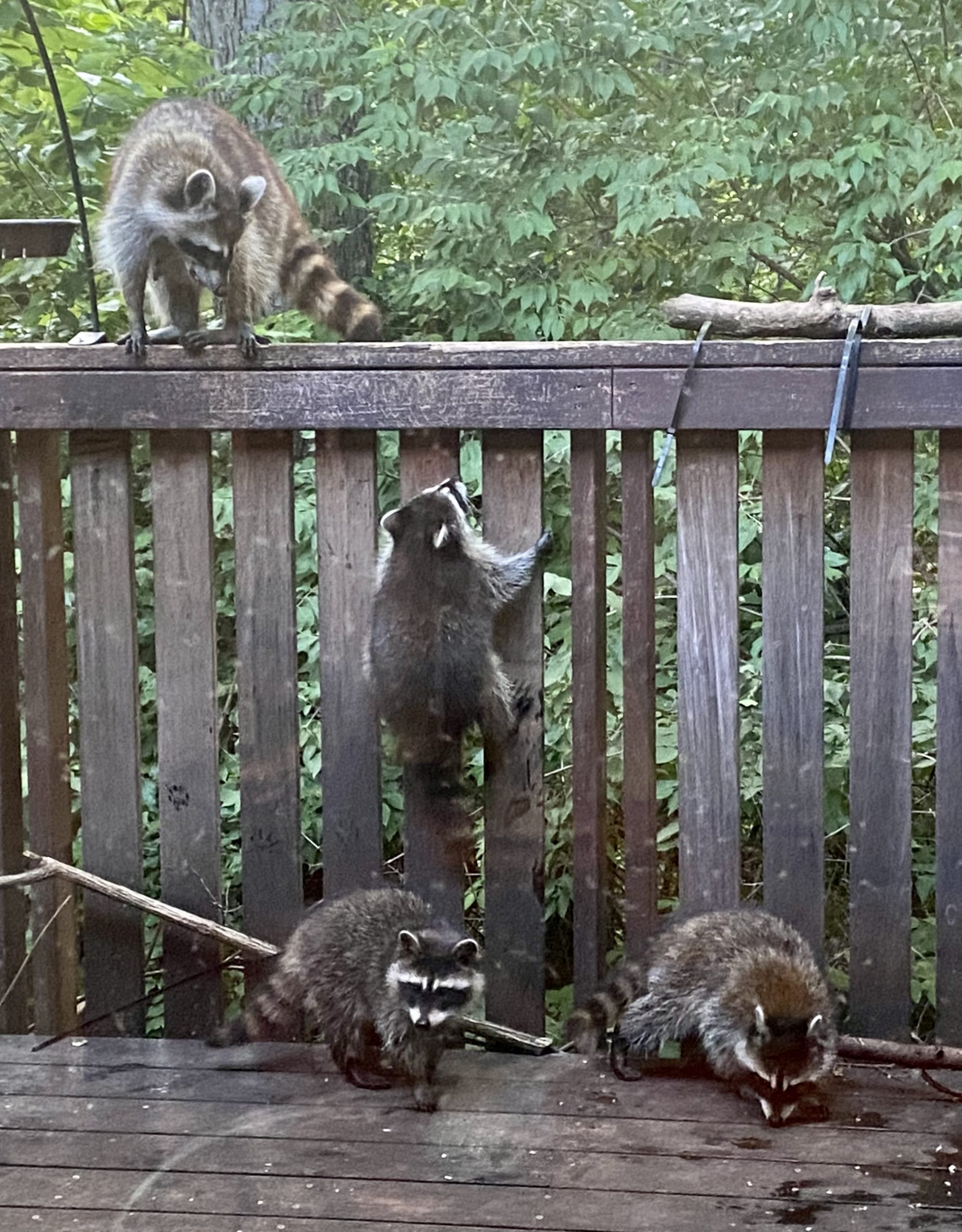 I have certain tasks that are important and urgent, as well as a number that make it over one of these bars but not both. I can’t seem to bring myself to do the ones that are essential, and this sluggishness is making it impossible to do anything else, as well: not less-important tasks, not basic grown-uppery, not even things that are fun, like reading murder mysteries. I am seldom this stagnant for so long. At this point I am so heartily sick of doing nothing, I may FINALLY be able to get going again. Writing this is a start.

Various things did happen last week: I reconnected with some friends that I had lost touch with during the workshops — and still others I hadn’t talked to much during the pandemic. There were tacos at Taco Zone, on location! With margaritas! There was even an actual face-to-face party last night that felt so delightfully ordinary I kept catching myself wanting to tell everyone how great that was. I also had a raccoon party one evening: a mother and three half-grown babies who crawled onto my second-story deck and helped themselves to the sunflower seeds I had left there for the cardinals.

I know the drill by now. When I feel like this, I need to suck it up and do whatever it is that I hate the idea of so much that I can’t bring myself to do anything else, either. This time there is a list of three things: two things day-job related and one writing related, all of them time-consuming, two of them tedious. If I forced myself into them for a couple of hours a day they would be done by the weekend. I think the reason it’s worse this time is that, once there three are gone, I can see a further three, also time-consuming, also somewhat tedious. Hard to be excited about clearing this obstruction when there’s another clearly visible.

I think a further reason why I am flailing is that I decided to experiment with bullet journaling, and it’s not working for me. Over the decades, I’ve developed a successful work-tracking strategy based somewhat on Franklin Covey’s dayplanners and a book I first read in the 1980s, Charting Your Goals. When I do what I have always done, I keep up with even obscene work-loads — but what it’s not been so great for is tracking events during the day. (Also, it’s not great for a job that is as week-to-week random as academia, but that’s a different problem.) I thought bullet journals might be a good way to capture both what happens and what needs to happen, but for me it seems to throw everything into a slurry, whereas I am used to splitting out my observations of my days from my to-do lists. It’s been so effective for so many of my friends that I wonder whether I have missed the point of it. But if I have a system that works, why am I changing it?

Writing was hard, but not because I didn’t do a bunch of it. I am working on this short story for a new magazine, and I wrote several thousand words this week on it. But they don’t add up. There are pieces for four similar but different stories in what I did, all just a little too alike to be split out into their own stories and saved for later, all too different to find any way to stitch them together. This is another reason things have felt blocked.