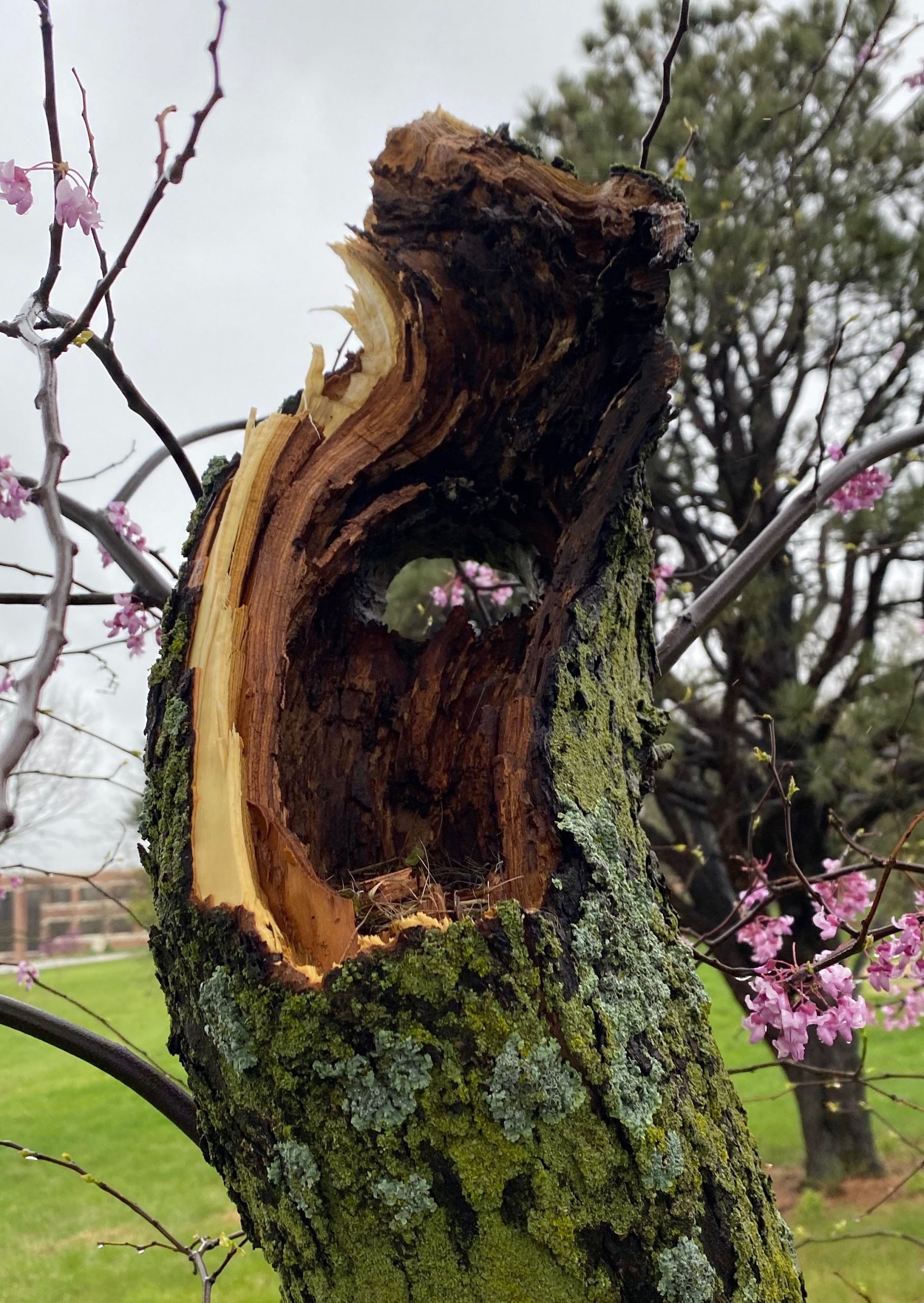 I am writing this as little tiny snowplows rove across my deck, looking for sunflower seeds and peanuts in the several inches of snow that has fallen overnight. They are not doing their usual hopping from place to place; they are heads-down, snuffling up every seed in reach, leaving a trail that looks less like squirrel tracks and more like someone dragged a a winter coat along the ground.

Squirrels were one of the the good things of 2020 for me. I spent all my time here, in this window, looking out. I was lucky and privileged enough that I could feed them, and I saw a lot of them throughout the year, along with many jays, two clans of cardinals, and a mixed gang of woodpeckers, titmouses (or mice?), chickadees, pine siskens, nuthatches, and house finches (two of each, like Noah’s winged ark) that rotated through in a specific order, like a well-trained team. Occasional guests were robins, grackles, and (regrettably) a sharp-shinned hawk and a redtail, which came through every day or two and helped themselves to the buffet I had unfortunately laid out for them. Over the year, I put up a barrier of bare branches to make the single approach harder, but once in a while the deck explodes with action as every bird and scurrier bolts for the surrounding bushes.

I wrote a lot this year, and six stories made it online:

The Stavebook and Noah’s Raven are both technically fantasy. I wrote a lot of words this year: 50K on American Tour, and 40K on the freelance project. Writing became the anchor of these increasingly wobbly days.

I live alone and stayed very isolated so that I could safely visit Jim Gunn, but I connected with a lot of people: regular skype or zoom or whereby hangouts, facetime and phone calls, paper letters and postcards, patio visits. I reconnected with my two best friends in high school, now married to one another. I was occasionally lonely, but less than I could have predicted, and I learned a lot from this that I hope will serve me in the future. Over the years of being single, I had come to value my weak connections: baristas, folks at the grocery store, that sort of thing. When I went into the office I said hi and chatted with whoever was around, always happy to do so. That all vanished. It was only after a few months that I realized suddenly, I wasn’t missing it: it was pleasant, but it took energy I hadn’t noticed, because it had never not been there. I really am a huge introvert (funny to still be making discoveries about myself at 60). I do like weak connections, but I am grateful to have been thrown more upon the strong ones, the people I love and know, instead of just the people I happen to meet and like. Five weak connections really do not equal one strong one, or whatever arithmetic one chooses to apply.

I got to know Jim better in his last months than I could ever have hoped for. He told me so many stories, and I helped him survive and stay home. I am so proud of that. I was always afraid I might bring covid to him, but in the end I didn’t. I am so grateful for that time, and for the fact I can look on it and know I made a difference.

I was really grateful to find out how resilient I have become. The people who knew me in my LJ days remember how poorly I coped with disaster in the 2000s. There were a lot of hard and scary things this year, yet I kept surviving, kept moving forward, kept finding something to be grateful and happy about every day (even though occasionally it was a stretch). This has been a hard year not to despair in — and yet I didn’t. However, I can feel in my body and mind that the year has taken its toll. We are all traumatized by what’s going on right now, and it will stain the children born of this generation. I am not sure how much longer this resilience will last, but I at least have developed some strategies that should help, even when I feel I am failing: minimizing news and internet intake; writing; walking a lot; daily check-ins with friends.

May 2021 be better than 2020 is a natural hope, but 2021 is not going to be pretty, either. It’s going to start with an armed insurrection and plague; it’s going to continue with a series of economic and environmental disasters; I can’t even imagine where we’ll be when it ends. We need hope to survive, but there’s a lot of stuff that hope isn’t the right response to. Hoping we weren’t irreversibly destroying the environment wasn’t enough. Hoping covid would go away; hoping that hate-filled extremists could be ignored or pushed into the margins; hoping that people would act selflessly when they had no training to do so (in fact, had been gaslighted into a place where they felt they could not do so)… Hope was the wrong response because it meant we could act as though the problem wasn’t entirely ours — here, now — to solve; we assumed our future selves (or our children) would get around to it. (Hope is always about the future.) We hoped and deferred and hoped and deferred and this is where we ended up. Hope failed us.

Yet we need hope to survive. How do we reconcile this? How do I find hope when I really do suspect 2021 will be worse, and I am tired already, even going into it? I am an atheist, so I do not — cannot — turn to god or the hopes of a better afterlife. A disastrous now and a scary future, and at the end of it no Good Place, with the cute house and as many centuries as I need to finally learn how to pronounce Icelandic properly — how do I personally find anything to hope for amidst all this? Despite what I just said, I certainly do hope that the nation doesn’t dissolve into an autocracy ruled by a madman (I can’t believe I live in a fantasy novel without magic); I certainly do hope that plastic- and radiation-eating microbes can be leveraged; I certainly do hope that we can stop being asses as a species. But even if we can’t or don’t or won’t or it’s too late or intelligent primates really are as bad an idea as I always thought, I can also hope that someone makes it through all this. Part of why I love the squirrels and birds is that they — well, nature in general — will survive this. Polar bears will be extinct, but life won’t be. Crows are self-aware and can think; the writing on the wall is that, even if we annihilate ourselves (but we probably won’t, we’ll just decrease in numbers for a time and change, the way the dinosaurs did), intelligence will recur, because it’s a good strategy for survival. For a while, anyway.

More immediately, the list of things I was grateful for in 2020 — the first half of this post — is the list of things I hope for in 2021 for us all: the recognition of a world that is bigger than humans; meaningful activities; significant connections and love; resilience. May you have all of these things. May you also have courage and patience and humanity. And, since hope is sometimes not the right response (or a least should not be the only response), may you, may we all, work to minimize the suffering of others, and actively love, both globally and locally.