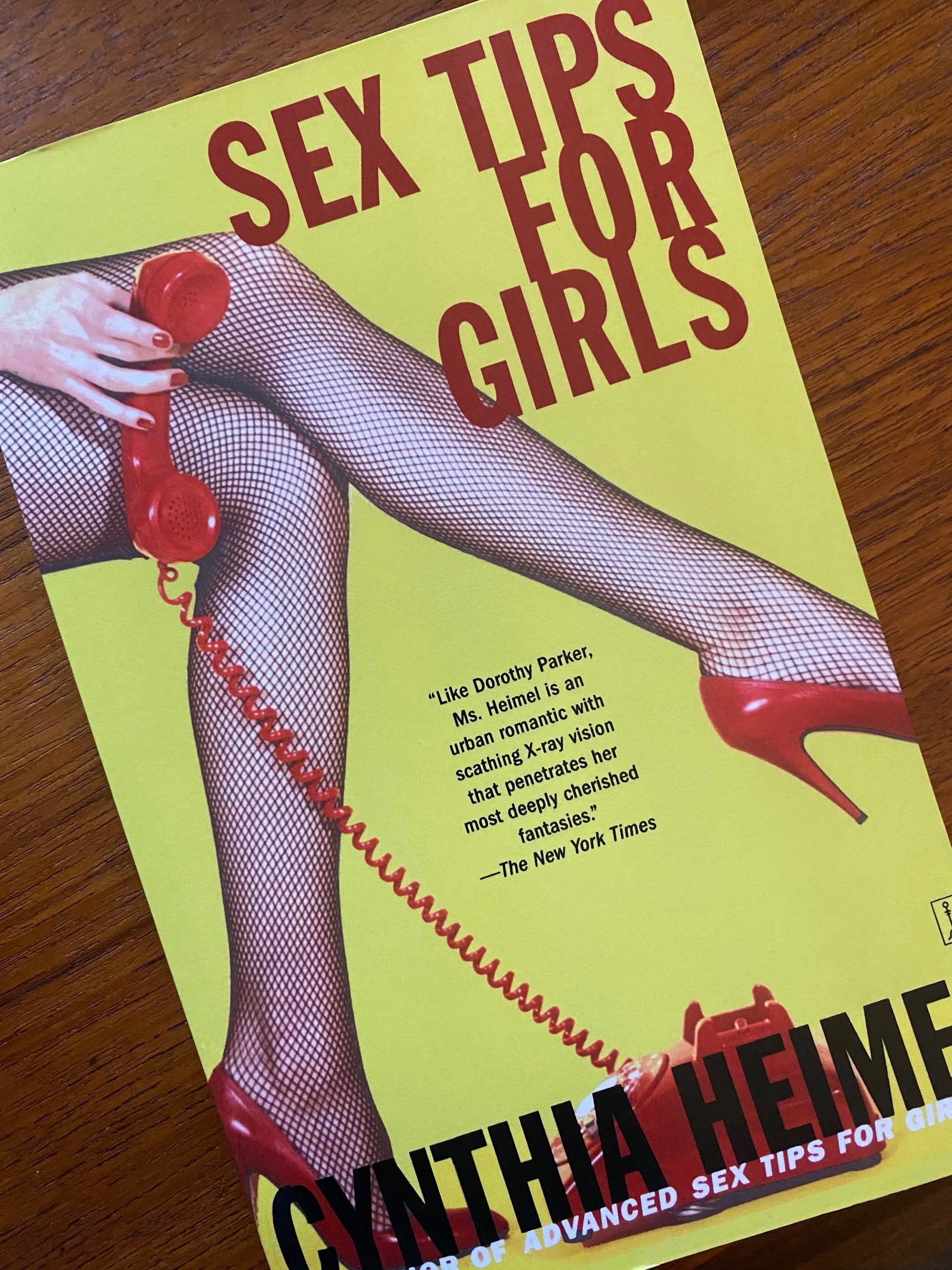 Sex Tips for Girls, Cynthia Heimel, from the dizzying past of 1983. Not actually a book about sex tips. Well, okay, maybe 25% a book about sex tips, and the rest of it more generally about sex and romance. The chapters are a collection of witty essays about how to find, identify, and have good sex with someone: also, if you insist, love. The assumption is that you’re not picking up this book if you’re lesbian, and a lot of the thinking about sex is very, very 1983 — but its underlying premise was that some girls like sex and lots of it, and what’s wrong with that? Nothing at all, says Cynthia Heimel.

In 1983, I was 23, and still trying to get a handle on my sexuality — and everything else — and this book fell like water in the desert. This was the tail end of second-wave feminism, when the movement was stalling out on questions of sexuality. Remember “All penetrative sex is rape”? Heimel was definitely not on that side of the fence, and neither was I. But even as feminism was fracturing and being subverted by everything that came during the Reagan years, I knew I was a feminist, even if I liked sex, even if I wanted a boyfriend (well, it usually wasn’t a boyfriend I was looking for, per se), even if I wanted life to be fun.

A lot of what Heimel said was common sense — don’t trust Cosmopolitan to know what tyou should be wearing; just because someone builds your bookcases for you doesn’t mean it’s love; practice with your diaphragm before you need it; breakups demand sad music and bourbon — but it was all so very funny when she said it. The sex advice was explicit and hilarious; the advice for life ditto. I read it every few years for quite a while, even as the specifics of her advice became less relevant.

The world has moved on, of course. Unlike some sex-writers of the early 1980s, her comments have aged well. This was a time (almost 40 years ago!) when some topics hadn’t even been framed yet, so it’s not a surprise that she doesn’t address them; but she conveys a sense that the world is big and full of variety, and that’s great. She later became a columnist for Playboy magazine. Being the only feminist on the roster in the 90s must have been a soul-wearying task: one of her later collections of essays is called, If you Can’t Live Without Me, Why Aren’t You Dead Yet?

And I still think her travel advice is the best I ever read, even if you’re not travelling just to hook up. I would just type in the entire short chapter, but that would be a lot of typing, also probably illegal. I’ll just give you a couple of her tips for travel:

2. Never pack more than you can comfortably carry…. You should be able to pack your things and be out of your motel room in approximately three seconds flat, or before the homicidal maniac can get there with a shotgun, which ever comes first.

12. Do not automatically assume that farmers are stupid.

13. Do not automatically assume farmers are romantic and deep.

I used her packing list for a long time, though I admit I didn’t include the sexy bathrobe, and I substituted tights for garters and stockings.

Anyway, does it stay? I think it does, for now. It was such an important book for me, back in the 1980s. And it’s still funny.

Next up: Buddhist Cosmology: Philosophy and Origins. This one may take a bit.