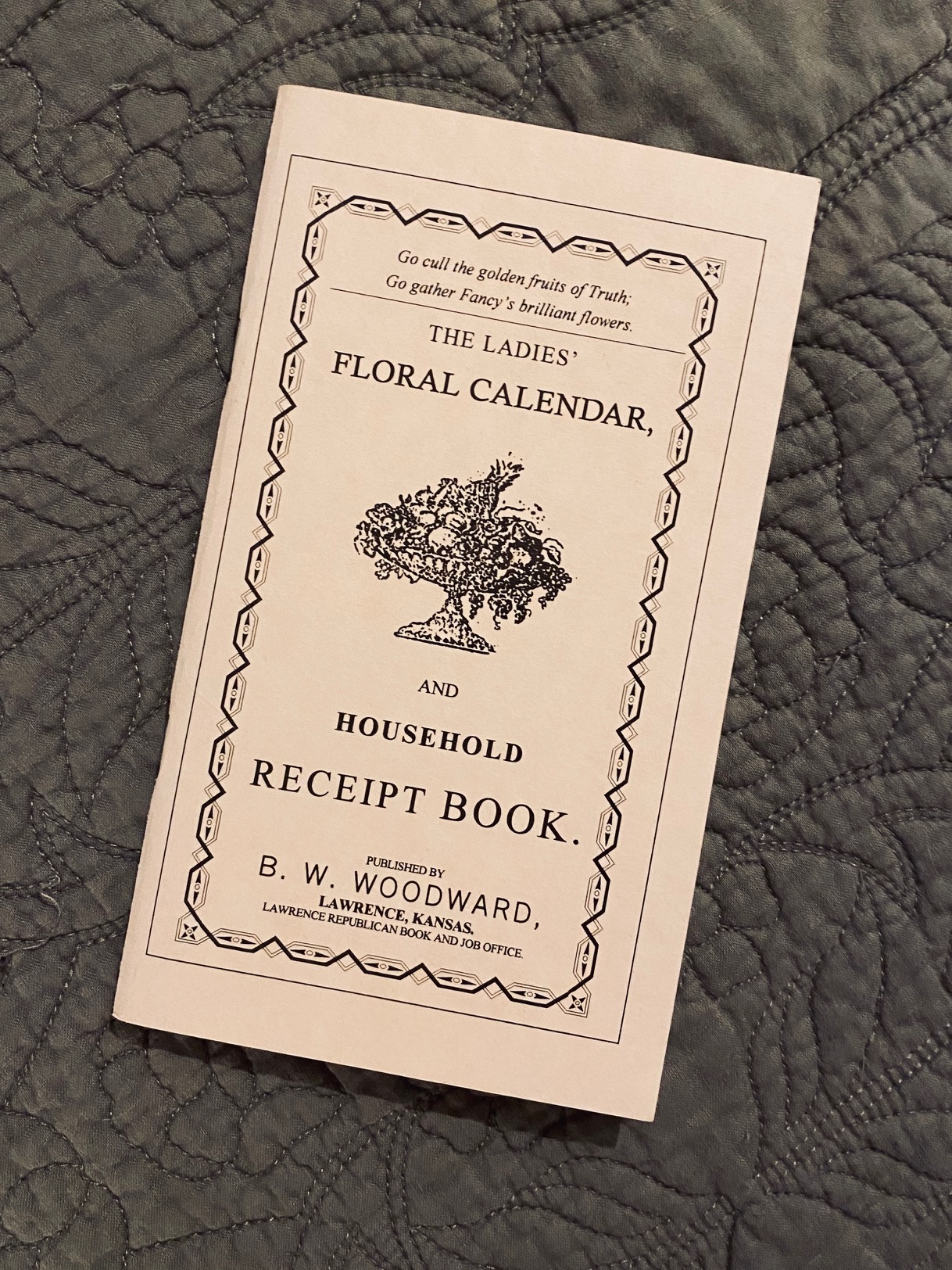 We’re heading into a slew of vintage and antique books about householding and cooking, now. The first is The Ladies’ Floral Calendar and Household Receipt Book by B. W. Woodward, published in 1868 and reprinted in 1999. I’m not linking to it, because the only version online is print on demand for $60, and for a tiny 48-page chapbook seems a little out of scale.

Oh yeah, I am keeping this puppy. Seems that B. W. Woodward was a Lawrence KS pharmacist with a whole lot of things to peddle, everything from Crystal Glycerine Soap to Aromatic Elixir Calisaya. The floral calendar, household advice, Great-Authors quotations, and recipes are the bread pocket around the pill, Woodward’s enthusiastic shilling of his nostrums. I am reliably informed that Woodward’s Germania Hair Renewer “produces wonderful effects upon the diseased scalp and GRAY HAIR, curing the former and restoring the color of the latter.” Woodward’s Blood and Liver Restorer fixes “all Humors of the Blood, Scrofulous habits, and Skin Diseases;” later he adds bad breath, acne, and melancholy. In a breathlessly enthusiastic letter, M. F. Conway cheerfully recommends the Ague Cure to anyone suffering from a deranged Liver.

There are a couple of these sorts of interruptions on every small, tiny-print page, and they’re worth the price of admission all by themselves; but I admit I love this most for its recipes. Here are a few, each in toto:

Mock Oysters: Six ears of corn, grated, one egg, a saltspoon of salt, a large spoonful of sifted flour and a pinch of powdered white sugar; beat up well and fry in sweet lard–a spoonful for a cake. Omit the sugar and add some pepper, and the flavor will be like oysters.

So….Mother’s Sausage. In these days, it’s hard to imagine ever possessing twenty pounds of “meat” (what sort, you ask? You know, meat. Like what comes from animals); but if you’re making that much sausage all at once, this seems underseasoned…waitwhatthefuck, pennyroyal? Isn’t that, like, deadly?

And in fact it is. But it is better known as an abortifacient, from before women’s medicine was taken out of their hands in the middle of the 19th century. I was just trying to track down an article I read some time in the last couple of years which made the argument that Mother’s Sausage in recipe books was a coded way to pass on birth-control information to women, and found quite an interesting rabbit hole (though I didn’t find the exact article). (“Mother’s Sausage” as in, “No more babies, thank you, I’m already a mother.”) What I remember of the article is that they claimed women would make “Mother’s Sausage” and then eat a one-inch slice of it every couple of hours without pause, with lots of water (you bet lots of water; pennyroyal damages the liver) until the suppression was removed. A pre-quickening pregnancy wasn’t recognized as such, but as a suppression of your menses, or an “obstruction.” Herbal and medical treatments to correct such suppression or obstructions often did so by removing the cause of the suppression, the fetus.

When I saw this recipe my ears pricked up: could this be hidden lore? But pennyroyal sausages and mother’s sausage show up in a lot of cute and folksy restaurant menus, and I’m guessing that the Cotswold Ayres Bed ‘n’ Breakfast (not a real place) isn’t trying to prevent babies from being born. And three tablespoons in twenty pounds of meat — you’d be eating a LOT of sausage to have this effect. I’ll keep looking for references to pennyroyal as I start through these other old receipt books.

Next one is The American Frugal Housewife, from 1844.