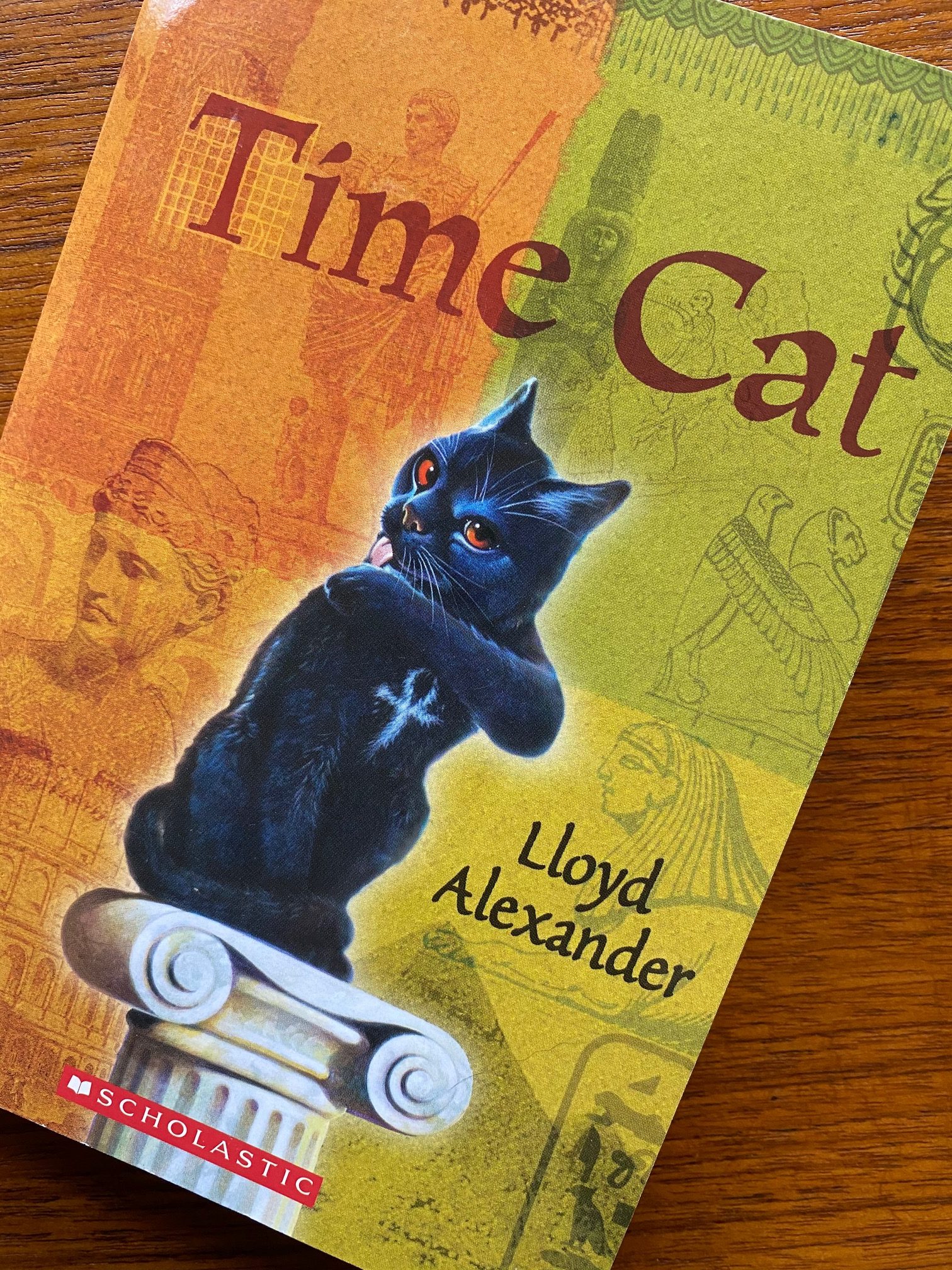 This isn’t quite one of the 1000. I read this as a child, and I owned a copy as an adult, but at some point I got rid of it. While I thought about the book vaguely from time to time (I was fun, I remembered that), I never thought about rereading it. But then my mom shipped a pile of books along with a gray sweater she wasn’t wearing any more (thanks, Mom!), and along with a nerd-forward ex lib. copy of the Kalevala from 1888 and some Chaucer stuff, she sent me this.

Time Cat, Lloyd Alexander, from 1963. Turns out cats don’t have nine lives, but they can travel in time nine times — if they think it’s worthwhile. Jason and his cat Gareth start in ancient Egypt, and stop off, sometimes for months at different times and places, often related to a historical moment (such as Caesar’s invasion of Britain or the start of the American Revolution), but occasionally more generally positioned in an interesting time/place (the cat- and witch-hating Germany of 1600).

It was just as pleasant as I remembered, but perhaps not for the same reasons. When I was little, I loved this book because of what it hinted. Jason lived in our world, but he could slide into another place from right here and right now, and that possibility offered a unique kind of wonder, different from the chance that there might be what I have learned to call secondary worlds. That whoa sensation is gone for me now, though there are still books from my childhood that trigger it, like The Perilous Gard. The pleasures this time come from seeing some of the first hints of the Prydain books here, especially the tone and themes, Alexander’s bittersweet approach to endings, and a character that overwhelmingly reminds me of Eilonwy.

From a craft standpoint, Alexander’s ability to shape a brief story-arc is incomparable, even at this stage. (He had written a number of nonfiction books before this, but I think this was his second novel?) There’s a section set on the Isle of Man that is gorgeously structured and very romantic — all of that in only a few thousand words.

But I felt a shock of delight when Jason and Gareth visit Japan in 998, when Ichijō (which Alexander spells Ichigo) is a child-emperor under the sway of his uncle, one of Those Damn Fujiwaras (which, granted, seems to be every emperor of the middle Heian period — they generally retired by the time they were in their twenties, replaced another yet malleable boy regented by a Fujuwara). This is, according to the lore, the exact time when cats were first introduced from China to Japan. Sei Shōnagon mentions this in her delightful Pillow Book, which was the first time I ran into the notion of the cats being imported at a historical moment. How did Alexander know this, in 1963? Did he read Shōnagon, too? That would have been the Waley translation.

I have written about corresponding with Alexander before this, about one of his books (The Remarkable Journey of Prince Jen), and my own Fox Woman, which he was kind enough to blurb for me. I’ll see if I can find that post from the 2000s; if I do find it, I’ll repost it here.

So, will I keep it? In spite of this, perhaps no. He really comes into his own later in his career, and the delighted knowledge that he and I shared a bit of historical trivia isn’t as important to me as the personal notes he sent me, typed on half-slips of paper and signed with his own hand.

So, next up, back to the more usual 1000 fare (not the Kalevala): either all those Norwegian-American cookbooks, or The Diary of a Victorian Lady.