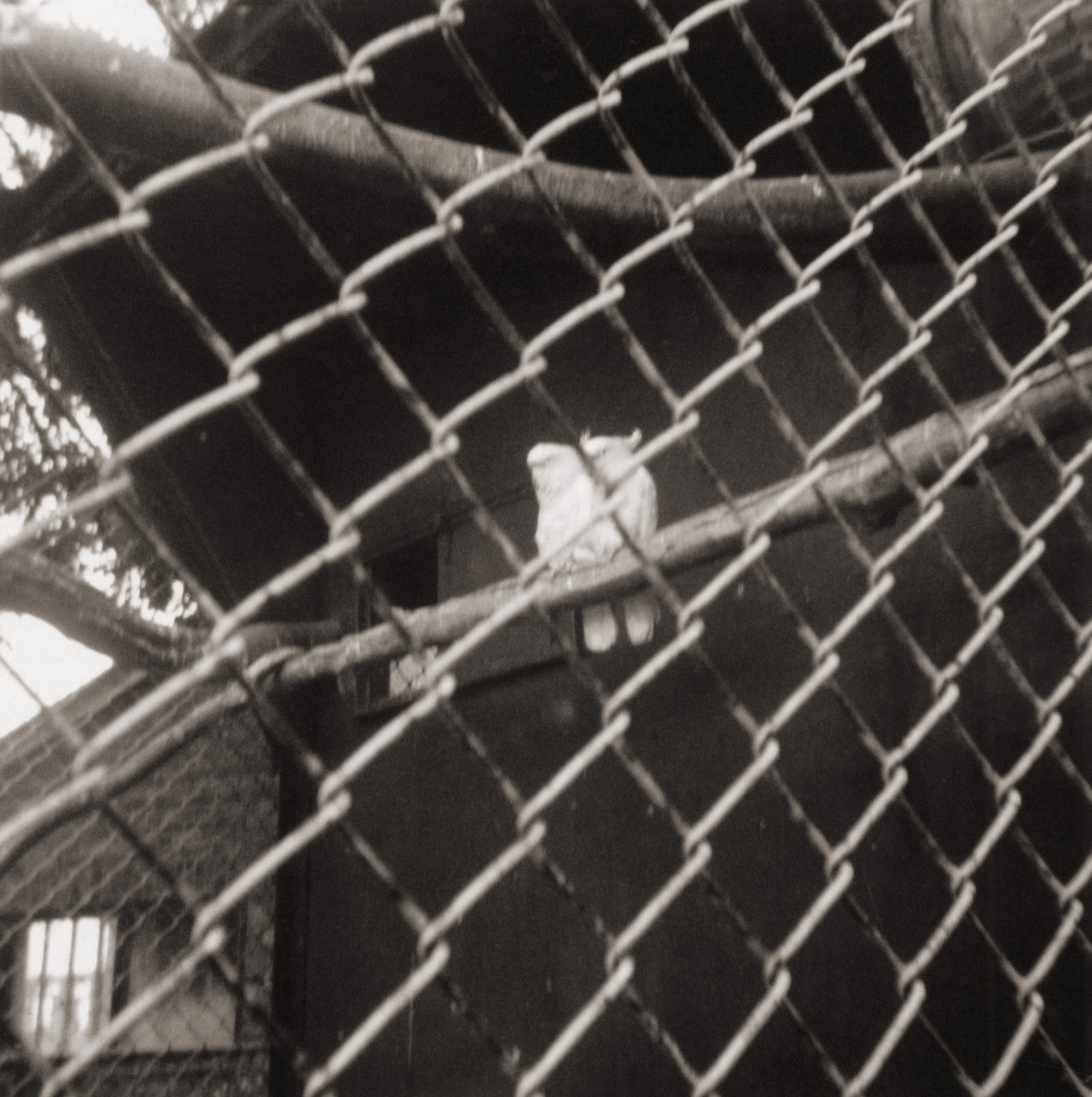 (This photo has nothing to do with the drive, except that there are birds in it. I took this with my infant paws with my very first camera, at the Whipsnade Zoo in the UK in 1965? 66? I had a single roll of film for three months, 24 exposures, and I hoarded them jealously. Yet decided that it was worth expending one of them on two cockatoos almost certainly squatting in someone else’s cage–since I think they could squeeze through the mesh. Was there some more conventionally photogenic jaguar or aardvark in this cage? Who knows?)

I took the Subaru to Columbia to visit Seth and Barbara — B’s birthday, V Day, a chance to check and see if the car was fixed (it is not), a Watchmen marathon and a few episodes of Due South, champagne, sous vide lamb, cupcakes with cocoa frosting, preliminary discussions about the summer workshop. It was refreshing and pleasant and centering, as it always is, and I left mid-lateish afternoon yesterday for the drive home, a bit under three hours if I drive the speed limit, about two and a half if I don’t. It’s been brutally cold for a bit (by Kansas standards; but a bit chilly even by Wisconsin standards), but yesterday was warmer and felt bright and just a bit pre-springish. Traffic was light, pavement was dry, and I had things to think about: a perfect scheme for a drive.

Partway across western Missouri, you are on flat plainsland, clumped a bit with trees, but with the big skies that belong over prairies. Mostly I was focused on the road and the traffic ahead of me, but at some point I glanced at the sky and saw a dark fleck on it. I slowed down a little so I could drop back into traffic and look at it.

It was birds. At first I thought it was one small V of geese or ducks, but then I saw another, much larger V just beyond it, and then other lines and Vs — hundreds of them, tens of thousands of birds, all flapping hard, WNW, against air they had to push themselves through. They mostly all flew at the same height, as though there were a surface they were floating on a hundred feet above Missouri, as though they were seams of seawrack on the face of a wave, and me beneath it, looking up.

I pulled over so I could look more carefully. A flock passed low overhead, a huge tangle of three or four Vs and several straight lines of birds. At the front of the largest V was a single bird, low enough that I could see its hard work, its stretched neck  and pounding wings.

The entire sky was like this, filled with birds. If I stared at a distant spot in the sky, eventually my eyes would adjust and I would see them there as well, irregular patches where the sky was just slightly less bright, which resolved into thready lines, which resolved, eventually, into dots just on the edge of my ability to scan them.

Looking up at this sky tangled everywhere with birds, I could imagine that I crawled along the bottom of an inland sea, and this is of course true. I walk on the floor of an ocean of air. Those birds were all flying at the same height, but I don’t know what other sweet currents other flocks found, two hundred, five hundred feet up. These were all geese or ducks, as I said, and low; would I even have seen a thousand thousand juncos at four hundred feet, except as slightly dimmed daylight?

I went on with my drive and as the sun dropped ahead of me and I came to the little lakes east of Kansas City, I saw them filled — filled — with Canada geese stopped for the night, settled in companionable thousands. By the time I got to Kansas and the sun was setting, I lost them: landed for the night, or moved to different altitudes, or just lost in the fading red sky.

There’s no way to describe this, really. The scale of it was magical, and the intent behind it: so many intelligences (and they are intelligent, in ways we can’t imagine) feeling the deep cold releasing, and edging northward. I saw them and for the first time, I wanted to stretch my neck and rise up, ease into the trailing leg of a vast V and feel them around me, the air full of wings and sound, and sleep the night on soft water surrounded by kin.