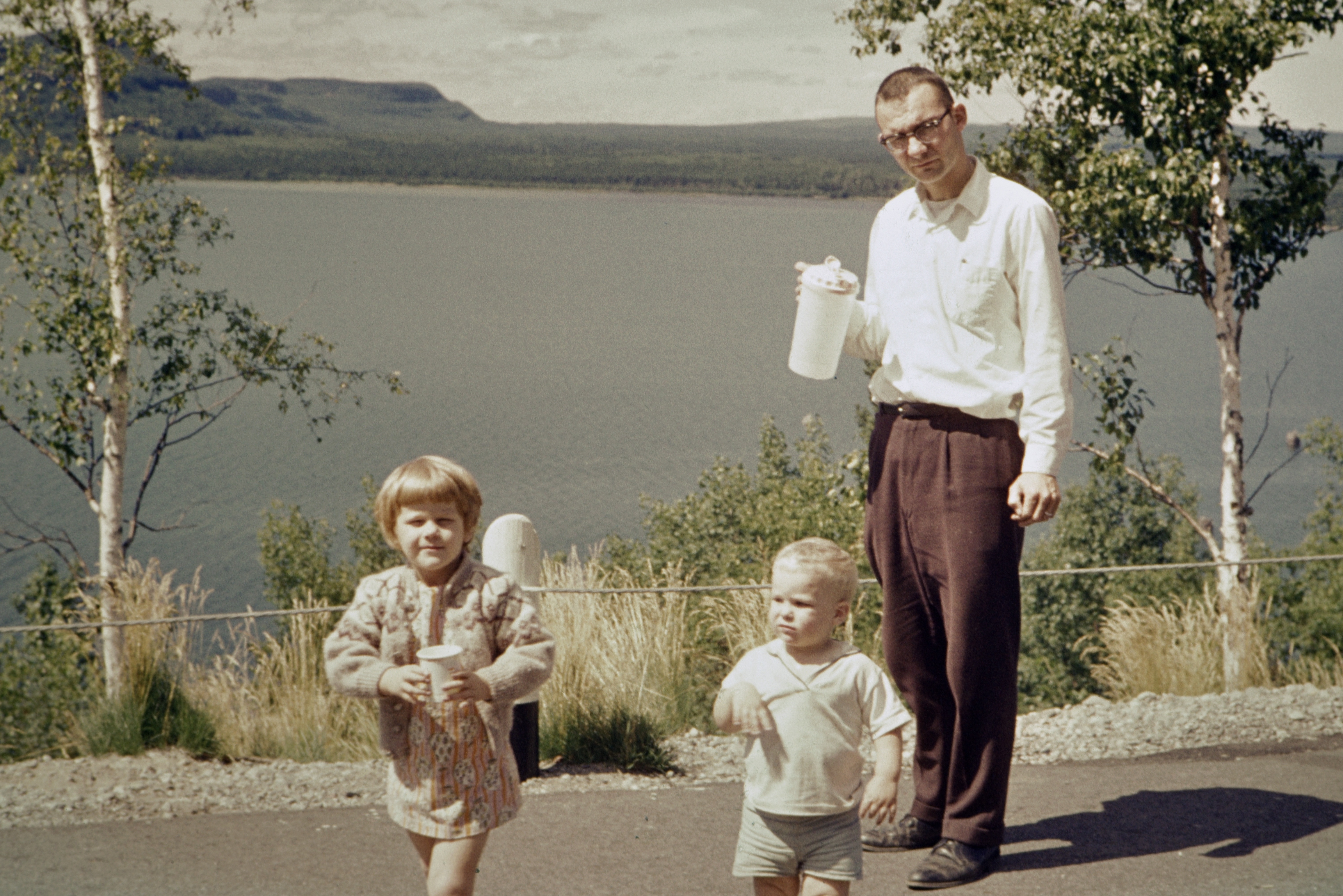 I am doing some thinking about fathers for a revision I’m working on, and this is bringing to mind my own father, dead these five years. (There’s also some sort of holiday happening, as I understand?)

This is my dad, when I was five and my brother was almost four. I don’t recognize the landscape, though in a lifetime of driving across the country, I quite possibly have stopped here as an adult at some point or other. We took driving trips a lot, often between our house in Iowa and my grandparent’s houses in suburban Chicago or St. Petersburg — and my parents loved the northwest, so there were a lot of drives out there, as well.

He looks serious in this picture, my dad. He often did, though I remember him making silly jokes, as well. He worked hard. At about this age, he also said Grace at weekly Lions International meetings and announced the annual tractor pull at the local summer festival, Denver Days. He read a lot of car magazines, and daydreamt about getting a Jaguar or a Jensen Interceptor, but bought sensible cars, Volkswagens and a Dodge Dart and little Saabs. He wrote a new sermon almost every week, and had a careful filing system for the notes in case he wanted to use one again, years later. He fiddled endlessly with our hi-fi, building the components from scratch, as being the cheapest way to get quality.

So that’s some small corner of my dad. As I try to shape the father of this character, I am creating a small corner of that man. Also, corners of his mother and his first love — and corners of the other main character’s brother. I can’t build each of these people entirely, of course — that would take a lifetime of actual living — but I can throw some points down on a plane and leave the reader to extrapolate the rest of it. But ultimately, isn’t that all we do for even real people? There was so much about my father I didn’t know. When he died and my brother and I went through the shelves and shelves of paper he had acquired in his lifetime, we found secrets. Even with all the datapoints I had for who he was, I was still surprised by what I hadn’t predicted.

Part of why writing fiction is hard is because people are hard. A motion capture for a CGI character draws a number of dots on a person: the dot on the nose directs the tip of the beak; the dots on the temples direct the antlers. But there’s a lot more of the actor-to-character conversion that is finessed: the long curve of a thigh tranfers quickly, once you identify the end points, the directional shifts of quads and kneecaps. If the filmmakers picked the wrong places for the dots, or if they forgot to include the dot that will direct the elbow, the CGI will have a harder time.

Certainly, as writers we struggle with this with characters; but we also struggle with this regarding real people. Did I ever know my dad, or did I just know the dots I had seen, and finessed the rest? What important moments were lost or never known or forgotten?

Still, I miss him and love the father I did understand at the end. The dots I did have were his gentleness, his autistic characteristics, his hobbies and behaviors, his low rumbling voice, the smell of his pipe tobacco, the smell of him.

Where Kij comes from, and why I want you to stop asking not just me, but anyone, about their names.