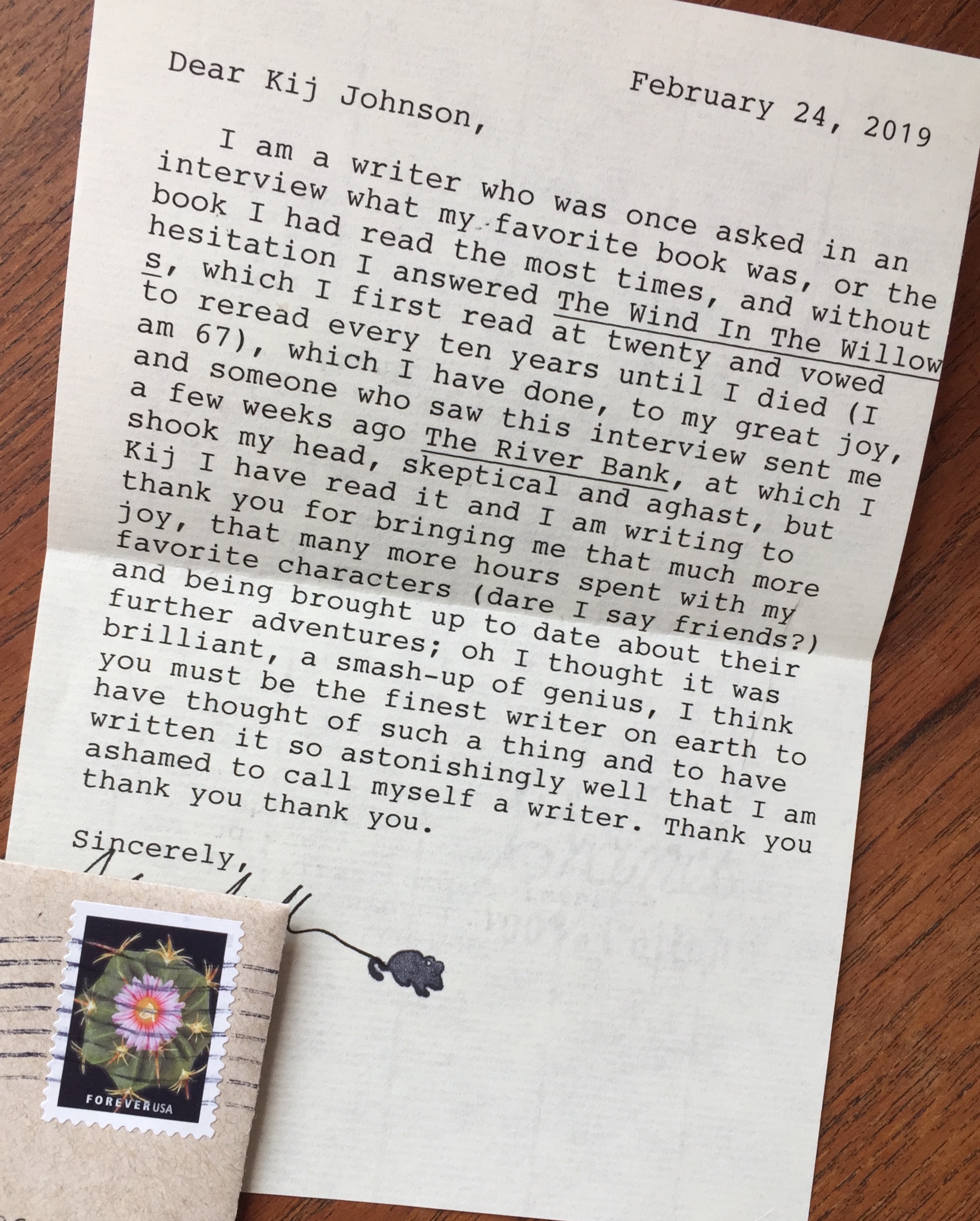 Yesterday I got an envelope from Small Beer, a bit too early for my royalty statement. Inside was a note from my publisher and a little beige envelope, with typewritten addresses and a tiny snail stamped on the back, all as pretty as a practical jewel. Inside was this. I am not going to tell you who the author is, but she is a poet whose work I have seen in Granta and elsewhere. I am humbled and honored — though I admit to a little relief that she also has a website, so I can write back to her without the delicate rigors of stamp, envelope, and typewriter ribbon.

You can guess how much it means to get something like this. I write a post here and two or three people comment. Over on Patreon: a number that is larger than -1 and smaller than 3. ven on Facebook, unless it’s personal and A Big Event, a broken leg or a marriage: maybe five? Once every month or so, I get an email from a stranger about something I have written. The number of times I have received a paper letter, out of the blue, a fan letter? This is the third, if we count the charming letter from the little girl whose father sent me a scan of his daughter’s love letter to The Cat Who Walked a Thousand Miles last month, and (throwing it out there) the postcard from Ursula K. Le Guin, from 28 years ago.

When I started my Patreon, it was in part because I remembered the glory days of Livejournal, when I would have thirty, forty, fifty replies to each post, all part of a intertwined, complicated, and substantial conversation about writing and life. I felt enmeshed in a community of people who shared my interests, at least as evidenced in that they liked reading my stories and I liked (for certain values of “like”) writing them. I decided it made more sense to do that over here instead, and I am so glad I did. But still: two, sometimes three responses — once I have deleted all the Russian porn.

Writing our real work, our books and stories and poems, is such a solitary practice. We start blogs and online journals and social media for promotional reasons, granted, but often just from isolation, to reach out during those endless periods when there’s no new story, when the book isn’t going well, when we feel this is all a huge waste of time we don’t have, when the world is tainting our writing with the grimy yellow persistence of toenail fungus. Are we reaching people? Does anyone hear us? In the flurry after something big gets published, if we are lucky, we have reviews and interviews, nominations and awards, but then those fade away. (Other times: crickets, sometimes even for the works I am proudest of.) The rest of the time, it’s easy to forget that anyone cares what we do.

A letter from a fan, sudden as sun through a break in the clouds, reminds me that I am not alone, that maybe it’s worth my while to do this. If you have never written a fan letter, words on paper in an envelope, stamped and sent, consider it. You will — guaranteed — make a writer feel better about her life. And she will — guaranteed — never throw it away.

4 thoughts on “Letters from readers, or: shouting into a well and the well occasionally shouting back.”