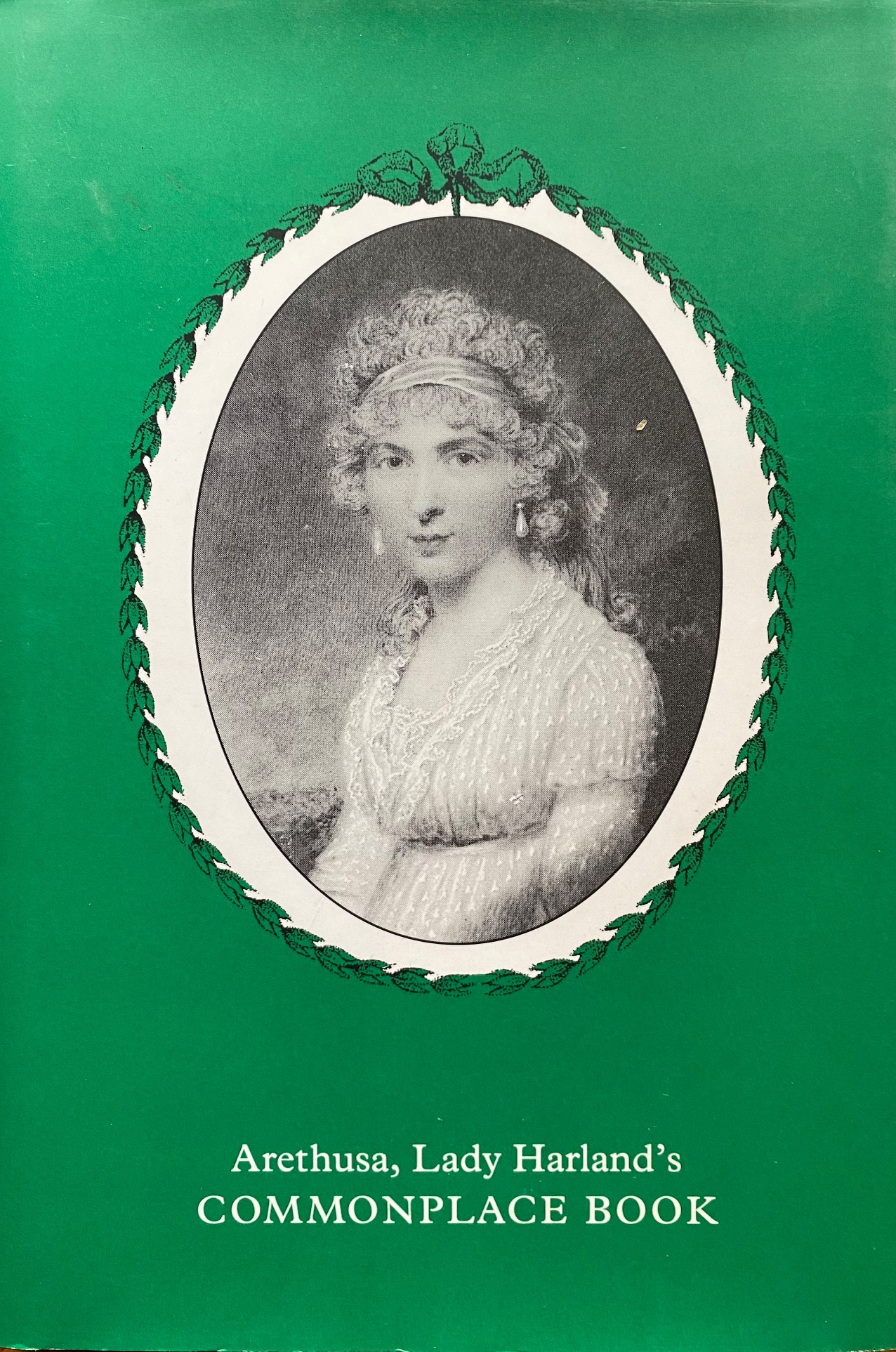 Arethusa, Lady Harland’s Commonplace Book: Memorandums of Various Sorts Made Between 1827 and 1833 By Arethusa Lady Harland at Orwell Park and Richmond Terrace, reprinted in 1992.

I think I got this when my brother, my mother, and I were in Cirencester for ten days a couple of years back. Maybe Hay-on-Wye? It has a £9.95 price tag.

This isn’t a cookbook, though it has recipes in it — like this one for making beer, which she claims is “exactly similar to the process of making Tea”:

Put a handful of malt into a Tea Pot, then fill it with water, the first time under boiling heat; after it has stood some time, pour off the Liquor, just as you would Tea, and fill up the pot again with boiling water, in a similar manner pour that off till the Malt in the pot is tasteless, which will be the case when all the virtue is extracted.

The Liquor or Malt Tea thus extracted must then be boiled with a few Hops in it, and when it becomes cool enough, that is, about blood heat, add a little yeast to ferment it, and the thing is done.

I am pretty sure it’s a little more complicated than tea, but I wouldn’t know. I’ve never tried: a foolproof recipe for making my own beer is nowhere in my own diaries and notebooks.

Alongside the occasional instructions for everything from perfume to eye ointments, it is a delightful insight into a prosperous but not especially intellectual Englishwoman: scarf patterns, recommendations for shops and books (and by whom), distances between towns, lists of her husband’s horses, things her staff need ordered from Town, an incomplete key to a roman à clef, bits of doggerel, trivial facts, how a magic-trick game works….

Historical receipt books and similar private writings by women fill me with joy. More than any portrait or biography, hearing these women speak for themselves brings them to life. That’s especially true when it is a candid diary such as Fanny Burney‘s, but it’s also the case here, as Lady Harland lists (and then erases) a milliner that was highly recommended, or jots down where she can buy the best quinine pills in Bury, or lists a neighbor’s silver: tea-strainer, “scallop shells,” and all.

Unlike Fanny Burney’s diaries, this practical little compendium doesn’t tell me how she felt about her husband or their continued childlessness (they were both the ends of their family lines), or whether she preferred Orwell Park in the summer or the winter. But I can put together an image of this women from the things she thought were worth writing down across these six years: a pleasant, inoffensive, likeable woman.

So, yeah, this stays.

Next up, the equally delightful Receipt Book of Ann Blencowe, A.D.1694.