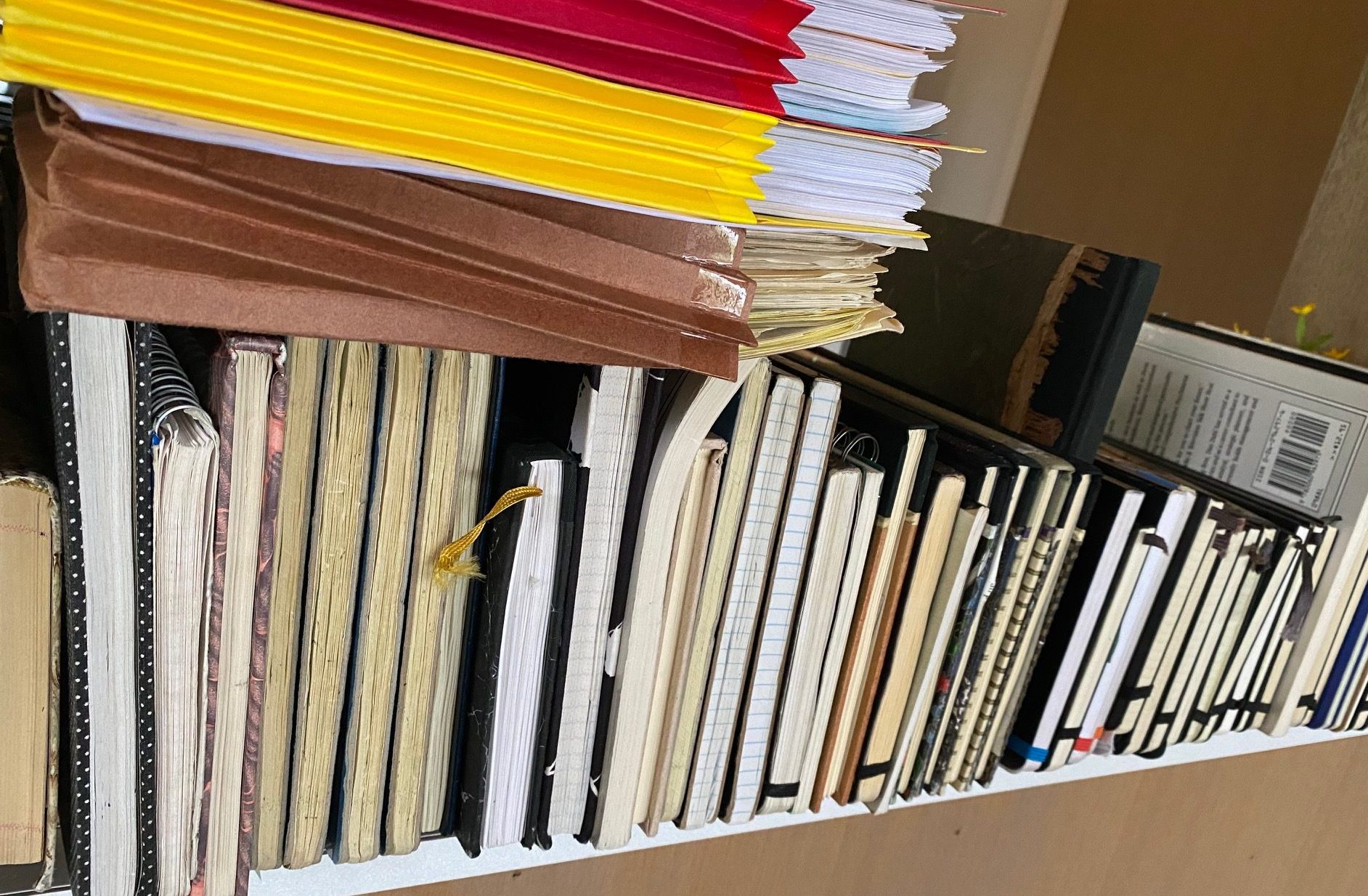 This phase is done: I did loose indexes (indices) of seventy-three journals. There’s one journal that seems to fit nowhere, from some time in the 2000s — but there’s no gap between journals into which this might drop, and no reason at all it would overlap with other journals. This also does not include the dozens and dozens of planners, which fill their own box and probably don’t need any indexing. Or do they? Please say they don’t. And there are still some journal-adjacent materials that need to be looked at and (possibly) indexed.

It…wasn’t pretty. I knew there was going to be a miserable sequence, the years in the 2000s when I was depressed and suicidal. I left those for last because I knew they would be the hardest emotionally. I figured that I would do them if they were the last five I tackled; whereas, if I got to them halfway through the task, I would probably just stop the project. And yeah, this was true. It took as long to do the last five as it took to do the twenty before that. But now it’s done. There are a couple more steps before I stuff these in a box and forget about them. It feels as though it will be very liberating, when I finally get to that stage. If I do.

Some more takeaways from the past:

I have outlined or pitched a lot of novels and novel-length projects that I never wrote. I have at least ten novels that I did the preliminary thinking (and sometimes preliminary research) for. Some of them are actually really cool — but their day has passed for one reason or another.

I wrote a lot of lists. Budgets, clothes to take on trips, things I want out of life, things I am afraid of, people I love and people I don’t trust, schedules, life advice for myself, favorite movies, top 25 SF stories, on and on. Lists are how I tried to make sense of the universe, myself, and my days. Some of the things in those lists are lessons that I wrote down clearly when I was twenty, and then again in subsequent lists, every few years, as though they were revelations each time. Maybe I’m just not that clever?

When I was chewing myself through a new discovery, I was relentless. There are journals of several hundred pages, where all I am doing is repeating an idea to myself, trying to make sense of it (or to make it stick, see above), and then doing it all again. Obsessive, past Kij?

I read books and then forgot them, a lot. An example: one of my favorite books is W. H. Auden and Louis MacNeice’s Letters from Iceland. I’ve read it five or six times, but I still remember discovering it in the Keflavík airport at the end of my first trip there, which was 2016, I think. ….Except I also read it in the 90s, evidently. I even quoted the same passage in my journal.

If you want to read about (and then read) a 250, there’s a locked post over on my Patreon.